You know, just one of those days when things just don’t seem to go right at all. Yep, that’s today.

It started out being a miserable rainy day from the moment I woke up. I planned to clean the fridge out for today’s Organization Challenge at Homeketeers so while Ava had her morning nap, I cleaned the entire fridge top to bottom. I also scrubbed the stove, the sink, the counters, basically the whole kitchen as I was suddenly on a cleaning spree.

I was going to make waffles for everyone so I went downstairs and found the waffle iron only to discover that someone must have dropped it as a large piece on the top was broken – right over the main electrical box. I plugged it in and turned it on and it immediately shut itself off.  Not repairable, so into the garbage can it went. No waffles today.

So I tried a new recipe for Ava for her lunch so while that was cooking, I put together (what I thought would be) a fun activity for her to do when she woke up. Finger painting! I know, I have a 1 year old, but don’t worry I’m not that stupid. I know she can’t really finger paint as it will all wind up in her mouth, her hair, her clothes, and everywhere else she can reach. So I made her a mess free type of finger painting (see the post I did on it here). I was so excited and had it all ready for her when she woke up, which was minutes later. 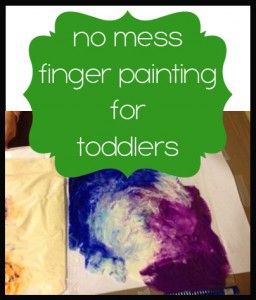 Well, she was not enthused with this new recipe and promptly threw all the food on the floor after one bite. *sigh*

Next up was letting her play with the finger paint. That amused her for maybe 5-10 seconds tops. I think I had more fun with it showing her what to do. She was not impressed.

Then I thought well lets not waste all the finger paint, so I opened one of the ziplock bags, put her hand in it and tried to get a nice imprint of her hand on this little canvas I had bought awhile ago. Yeah right. You can’t even tell it is a hand imprint! So I stamped her fingers on it again in a few places and voila – here is Ava’s first “finger painting”. 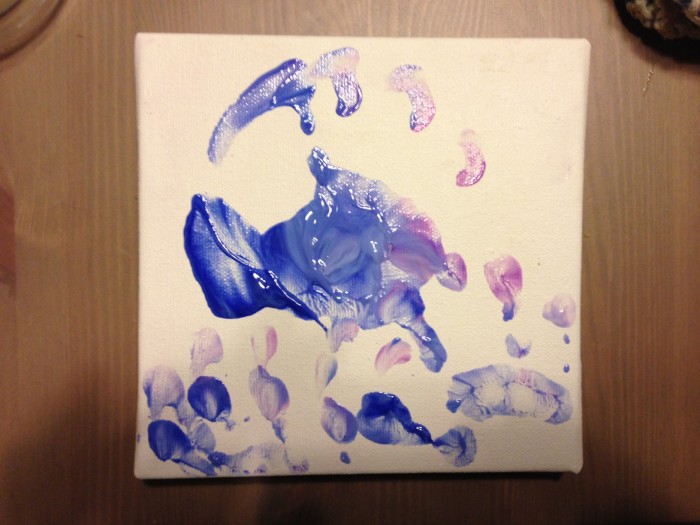 I also had found (while I was looking for the finger paint), a couple of those hand print plaster kits that I was saving for her. Perfect timing, I thought. I will get an imprint of her hand in the smaller one and her foot in the larger one. I read the instructions and mixed together the plaster, then poured it into the tin. Perfect, now all that was left to do was place her little hand in the wet plaster, pull it out and I’ll have a cute little hand imprint, right? WRONG

For the other one, I added too much water to the plaster and it was way too liquidy. I figured we’d let it harder for a bit and then I’d put her foot in it and at least she couldn’t grab the plaster with her foot. So I left that on the counter in its little tin to harden up.

Meanwhile Ava was fussing so I cut up a nectarine and let her have that for a snack. She normally loves all fruit and ate about half of it, then promptly grabbed her tray and threw the entire thing on the floor. So then I did what any mom would do. Any mom with a pig in the house that is. I called Norman over so he could eat all the food off the floor. Wonderful. While he was “pigging out” (haha), I took Ava to wash her hands and then I got her busy with some toys in her room. An hour went by, then we came back into the kitchen to get her some milk and I notice Norman rummaging around in my purse. He had knocked it down off the table and was searching for snacks. I had completely forgot I left him alone in the kitchen! Then I see one of Steve’s new work boots – all chewed up!!!! Now there is a story behind this as well. Steve read somewhere that a good way to stretch out new work boots is to fill a bag with wet oats, then stuff it into the shoe, and put them in the freezer. So apparently he had taken them out of the freezer this morning and put them on the floor in the kitchen. The oats in the bags are still in the boots as you have to wait for them to defrost before you can remove them from the boot. Norman found the oats and figured it would make a good lunch. So he chewed up one of Steve’s boots trying to get the oats out. He succeeded as I found no oats but about 20 pieces of the ziplock bag strewn about the kitchen. Now there is one completely ruined boot, and it’s totally my fault for not watching the pig.

I clean up the mess of the boot and walk by the counter where I left the other plastic thing for her foot imprint. I feel it to see if it’s gotten any harder. Yep, sure has. Completely hard. Darn. So that one is ruined. 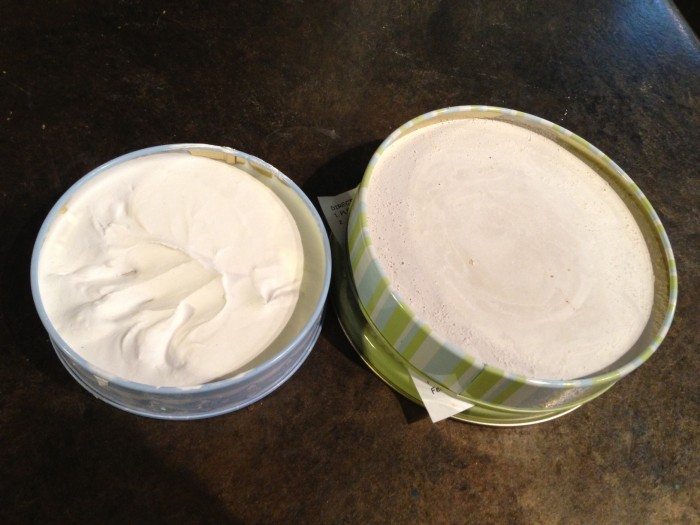