Just one guinea pig that is. Our little pig Ernest died today. We knew it was coming. He was old and very frail but he kept his spunky attitude right up to the last minute.

Fro (who is a BIG pig) is our last remaining one. I think our guinea pig saga is coming to an end. Almost 2 years ago now, I got this *brilliant* idea to adopt a pair of older guinea pigs from a rescue org or shelter. We found some with the Small Animal Rescue Society of BC (SARS). When we went to look at some at the foster home they were at, we left with 4 guinea pigs, not 2 like we had intended. They even gave us another huge cage to take with us. (they really wanted us to take both pairs of male pigs). All the pigs were adults, their exact ages unknown as all had been given up or abandoned. (one was let loose in Stanley Park Downtown Vancouver, one was left behind in an apartment after the tenants moved out (!!), and the other two were just surrendered to the organization cause they weren’t wanted anymore. All 4 of them had sweet personalities and weren’t timid at all with us.  However, they came with various health problems. One died within the first week of us having him, he came down with phemonia overnight. We rushed him to the vet and they tried to save him but he died a few hours later. That led to the adoption of Ernest, the 5th pig for us. He belonged to our local Humane Society and was being fostered by our small neighborhood pet store that we shop at. He was there for months and they kept trying to get us to adopt him, especially when they learned that we had all the other pigs at home. The humane society told us they just wanted a good home for him, preferably someone who knows guinea pigs, so he can live out the last few months of his life. They said he was quite old and didn’t have much time left. Well that was almost 2 years ago so Ernest did well!

Long story short, all the pigs had their share of health problems (except Ernest actually!), and they are all well known at our vets office. Fro is now an only piggie. I don’t think we will adopt any more pigs, but who knows! 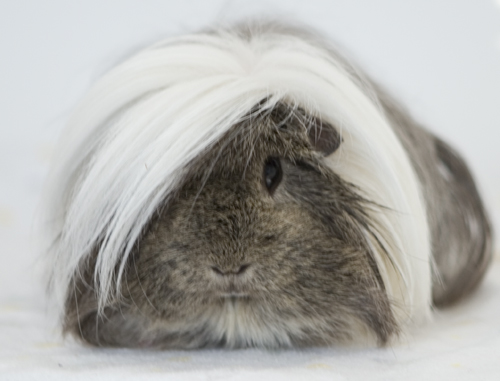